Kicking Off The Semester

It’s important for me to discuss this because it really set the tone and context in which this project was built. After the group was formed, I had the honor to become Most Oldest People’s Creative Director and right off the bat I went to work strategizing. We started off the semester forming a group composition of 1 programmer and the remaining members falling into all spectrums of art and design. I was approached by other experienced students from other groups for several weeks leading up to our prototype milestone. Our conversations, centered around their concern for our ability to make anything with such an unbalanced group. I think this is where our own personal experiences with other projects came into play.
​
Over the first few days of the project's beginning, the team came together with the understanding that, on paper, our team composition looks like a game development death warrant. But it was a fact easily answered because our experience lead us all to the same conclusion; we are all, first and for most, game designers before anything else. A project’s success will never be fully met if it is not first designed to be a project the team, any team, can actually take on. We had all been on projects with desirable skill compositions that completely devolved into desperate stressful crunching to make the bare minimum product.

We started by taking stock of our strongest members as it pertains to their talent and skill in a given craft. This meant that our strongest programmer, animator, lead artist, and 3D modeler would not have to be responsible for team management in any way and were only responsible for focusing solely on what they were best at for the duration of the project. We then selected department leads based on members who understood the obligation to first manage the team when needed and make sure everyone had everything they needed to work effectively  before they could focus on the project tasks. Two members took on the challenge and really knocked it out of the park by the end. Remaining members were obligated to be available to work where work was needed in any department. These members ended up being the thread that sewed all the departments together. Whether it was through world building, enemy placement, UI integration, you name it, they hopped in and got things done.

With this work dynamic in place we then set out to concept a game that a group like ours could complete. We weighed our skills, found plenty of ways to scope, now or in the future, created a story that was as off color as we were, mechanics that were diverse yet simple, and best of all everyone was on board with strengthened optimism.
​

Below are downloads to Merry Mayhem’s Project Documents:

As the Creative Director I am responsible for the cohesiveness and quality of the project across all departments. This had me doing some work here and there when it was needed. Below are some 3D models I contributed to the project. Modeling was never really something that peaked my interests professionally, but our concept artist, Gabriel Ramos, concocted some crazy fun enemies and I had a blast making these. 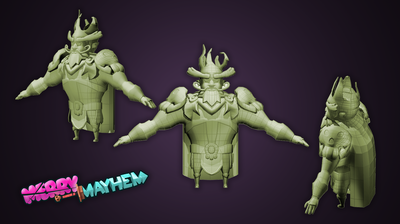 The Master of Chaos 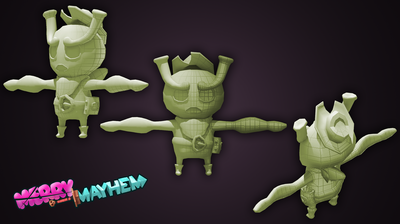 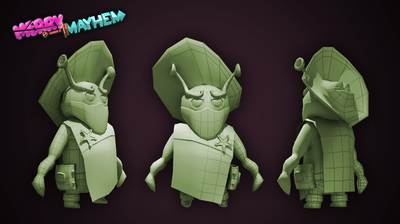 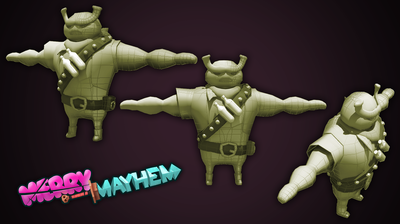 There was a moment in development where we fell behind in level design. I set out to draft and then white box two of the game’s levels. I began with maps and legends so that anyone hopping on to edit the level, could reference the points of interest and world flow at any time. I then white boxed the level’s in engine using Unreal’s BSP. 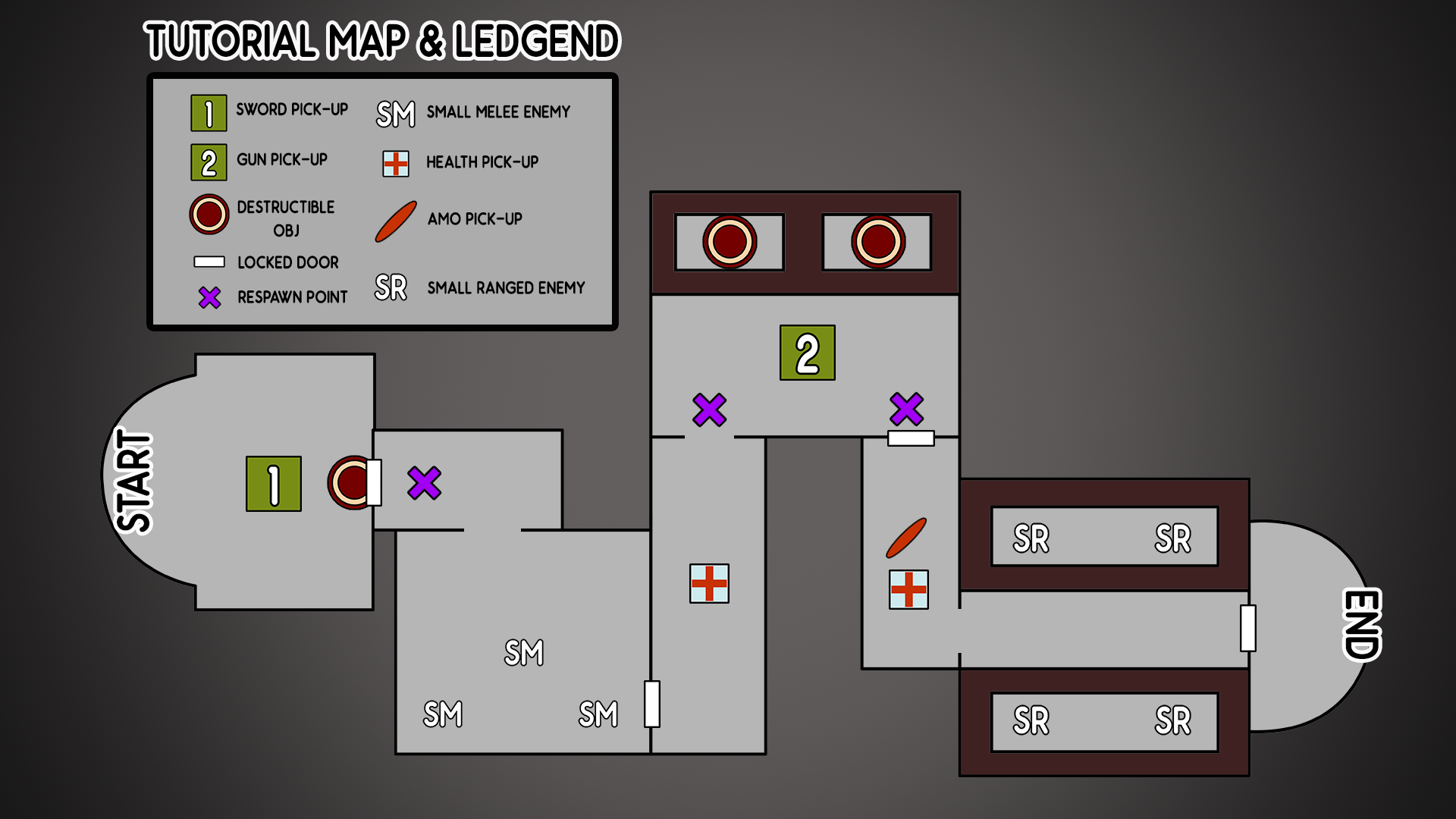 There were two important objectives that needed to be met in the tutorial. One was teaching the player how to use their base attacks; the gun and sword. The other was allowing there to be just enough space so that we could also set the tone for story dialogue and inform the player to the narrative reasons the game is progressing.
​
This map is what we settled on. The general flow is that, the player picks up one weapon, tests it on breakable objects, then enters a room with live enemies to further practice. Particularly with the gun, I set the breakable objects and the enemies on platforms where the player can not reach them with the sword and must use the gun to be successful. These tasks are set across a distance that allows the narrative to be told at the same time. By the end the player know’s how to use their base skills and they also know what their character’s (Pax) objective is for the rest of the game. 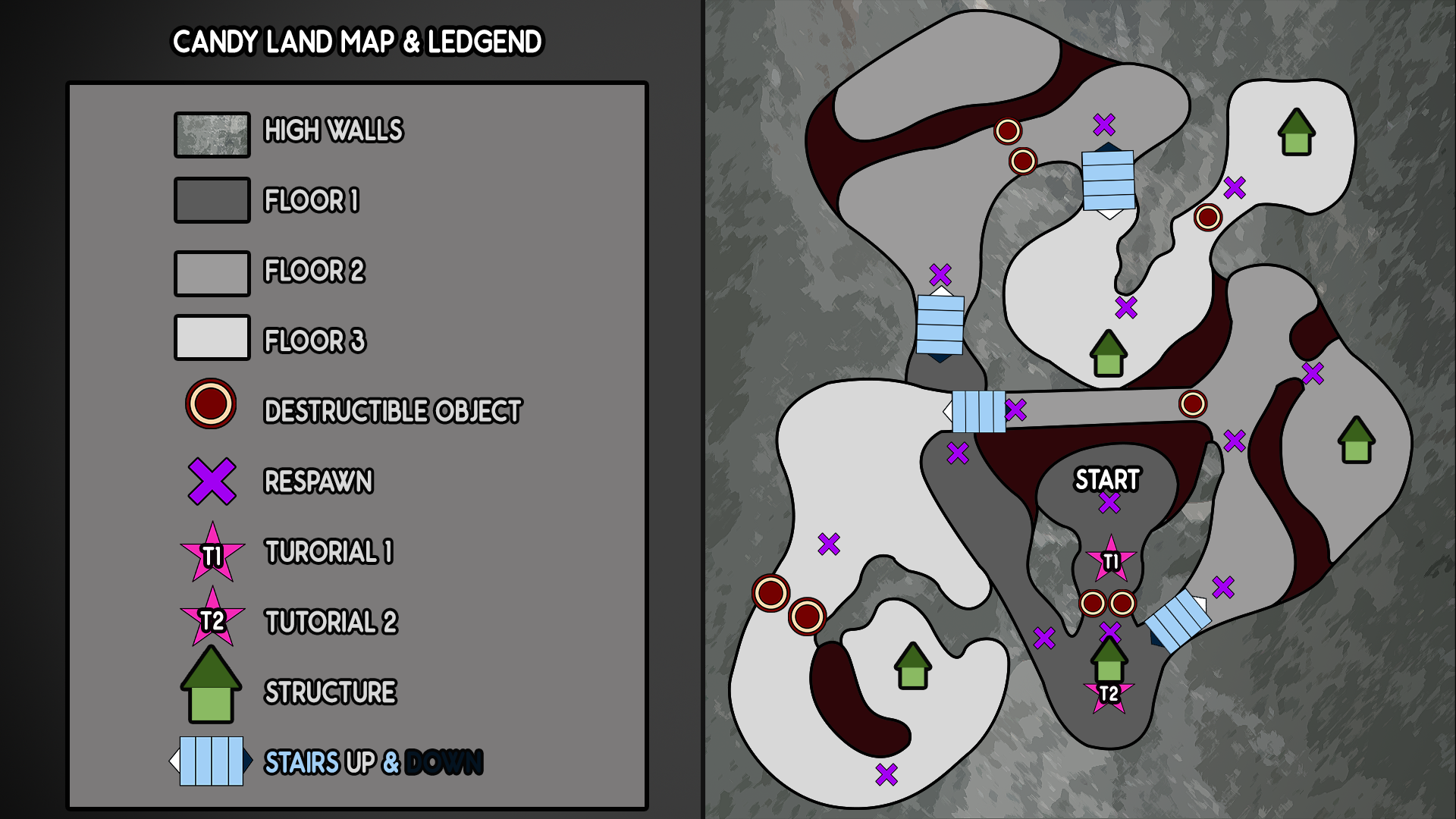 Candy Land has two critical paths. The player will first head through areas that teach new material to the player about the way the world works. Once the player reaches the end of this linear progression, the player can choose to go right or left. The end of each path is designed to make sure the player reaches max chaos and is near an exit point when it happens. The play space ebbs and flows between close combat areas and larger expanses giving the player a chance to test out their preferred play styles.

Apart from my obligations as a creative director my personal career focus is in sound design and music composition. Below are some of the pieces I composed for the game next to in game art images of the level the music was made for.

The Throne room is experienced by the player twice. The first instance of the throne room is played as a tutorial. The music track above plays with only the soothing melody. This softer version of the song instills a calm and patient atmosphere for the player as they learn Pax's base skills.

The player re-enters the throne room and encounters the final battle with The Master of Chaos. 'Throne Room Overthrown' plays. The melody is familiar to the player but now intensified and rhythmic. It captures the pace of the combat elevating the encounter.

Candy Land is the player's first introduction to Merry Mayhem's true game play. Prior to entering this land, the player has been given an introduction to the game's off color story elements through dialogue. I thought it would be a fun kick in the face, to begin with a composition that was as off color and jarring as the game's characters are.
​Candy Land is bright, childlike, and high energy and these qualities were reflected through bell instruments and music box tones. Playing to the childlike aspect of the environment, little creepy voices waft through the beginning of the piece. The consonance is quickly and frequently disrupted through overtones in the guitar voices as well as emphasis on the & of beat 2. Finger snaps are used lightly and some times don't feel like they match the rhythm.
As the name of the composition suggests, inebriation was the inspiration for this piece. Additionally, the player has not been fully introduced to the full extent of the game's adult dialogue. I thought nothing would complement the story better than a song equivalent of an intoxicated child.

I’ve picked up an interest in videography over the past few years and I find myself more often than not, using this talent in many projects. It’s also a great way to show off my sound design and audio post processing work. All the video editing was done by myself as well as all that you hear, including the music score. Everything is pre-composed mostly in After Effects and then dynamically linked into Premiere for subtle adjustments and exporting.
​
On a side note I had a really fun time writing the ending credits music and working with Pax’s voice actress to sing the ridiculous lyrics. It wasn't a critical addition to the game but I couldn't pass up the opportunity to add that little extra character through music!

Only a few months after completing Merry Mayhem, Orlando's local indie games promoter, IndieNomicon, invited us to come and present. Below is the video of our Post-Mortem presentation,

meet the the most oldest people

Merry Mayhem was made possible because of the hard working, talented student game developers listed below. 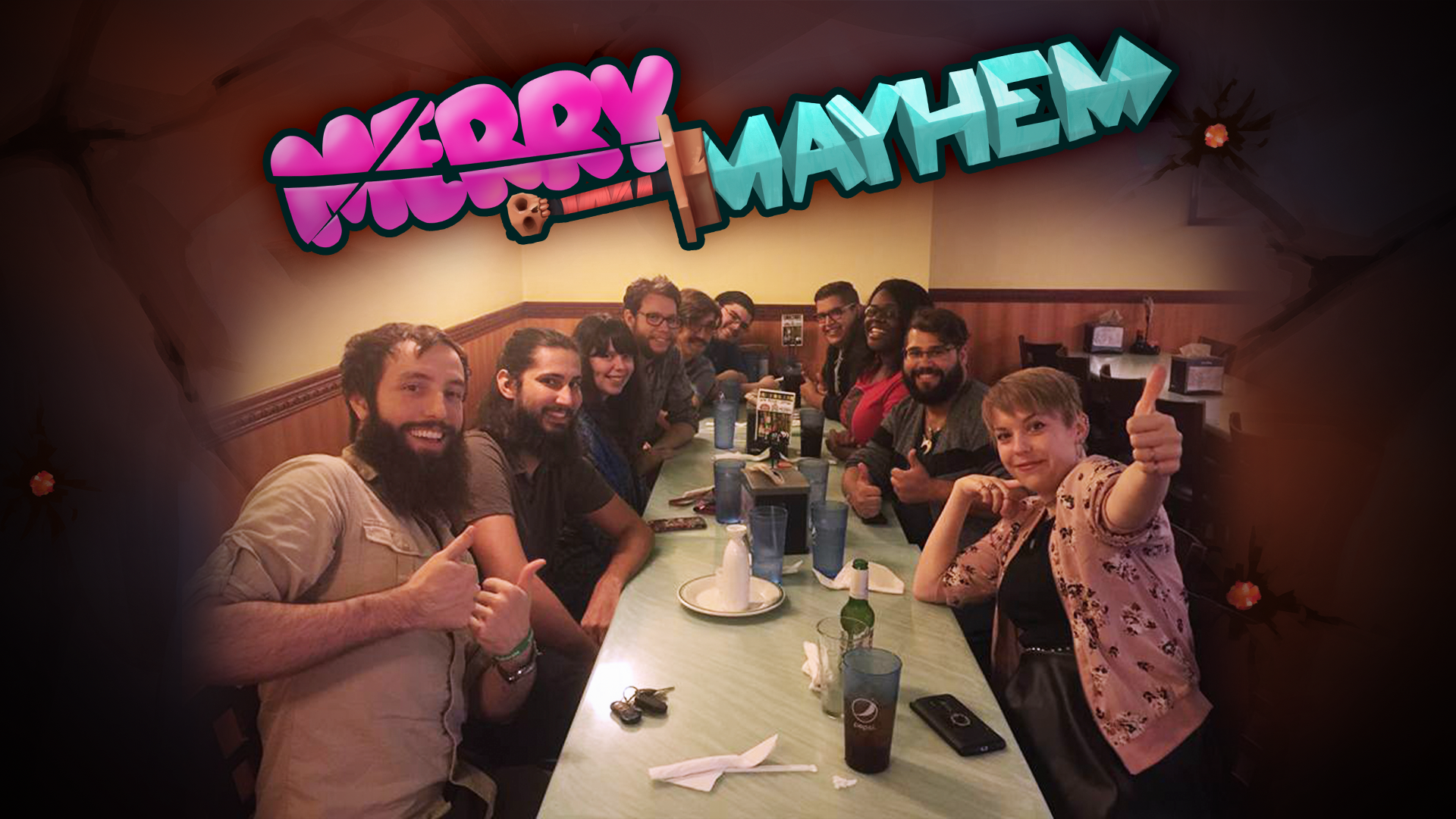